A Training of Trainers for school psychologists under the Ladya program for primary prevention of risk behaviours and HIV/AIDS among children and teenagers – was held from November 28 to December 1, 2011, at the Moscow Patriarchate’s Department for External Church Relations. It was attended by school teachers, psychologists and clergy from Nizhniy Novgorod, Rostov-on-Don, Lipetsk, Chelyabinsk, Bryansk, Magnitogorsk and Dzerzhinsk.

All the participants had been preliminary trained for work with children under the Ladya program. The training had been organized by the Russia Round Table in cooperation with Blago, a Bryansk-based church-public organization. The training had been followed by at least a year-long period of lessons held according to this program in schools, colleges and vocational schools. The knowledge received at this seminar will enable participants to train their colleagues, school teachers and psychologists, for work with children according to the Ladya program. It will increase the number of educational institutions in which this program will be taught.

The program of the training seminar included a study of interactive methods of holding lessons both with teenagers and teachers, such as group discussions, game exercises, etc. The participants discussed problems of the personal advance of teachers, their qualities and skills necessary for the effective conduct of a training seminar and ability to control the emotional state of a group. Special attention was given to the problem of formation of teenagers towards a responsible attitude to themselves and to people around them and to the prevention of various forms of deviant behaviour. 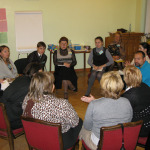 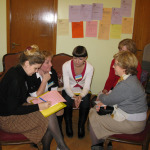 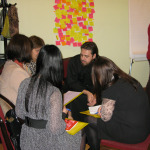 The Ladya program was developed by a team of Church and secular specialists including educators, psychologists, psychiatrists and narcologists, who worked under the aegis of the Moscow Patriarchate’s Department for External Church Relations.

Conceptually the program is different from the popular information and training approach which does not deal with the fundamental causes of risk behaviours that lead to infection with socially dangerous diseases. The original and innovative nature of the program lies in its aim to form in teenagers a system of spiritual and moral guidelines which, realized in behaviour, would reduce to a minimum the risk of deviant behaviour and therefore infection with socially dangerous diseases. At present, it is successfully implemented in schools and colleges in ten regions of the Russian Federation.

The seminar was held with the support of the UN Population Fund.